If you're finding that despite your efforts to conceive, month after month pregnancy tests are coming up negative - the word 'infertile' may come to mind. Infertility is clinically defined as an unexplained failure to conceive over a 12-month period. This can be due to either female infertility or male infertility, or the infertility of both partners.

One in six couples suffer from infertility, but due to the evolution of technology and modern medicine, many new techniques have come into place to aid couples in conception. The causes of infertility are wide and varied, and can be caused by simple structural abnormalities to widespread hormonal imbalances.

In this post, we will be discussing types of female infertility, symptoms, causes, treatments and your options.

Ovaries store eggs and guide the hormones that cause the changes to your body during your menstrual cycle and pregnancy. Without these eggs, conception is impossible. 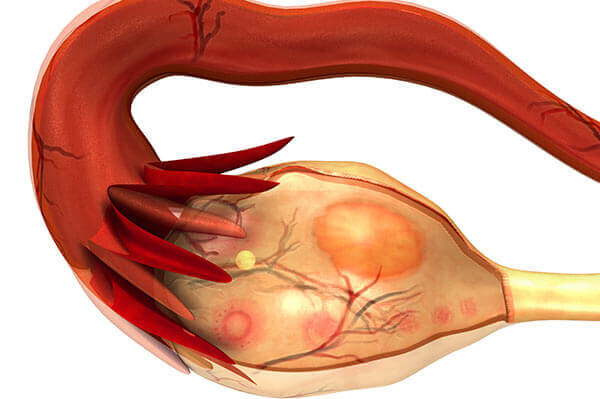 The main factor that causes infertility in women is age.

You were born with a predefined number of follicles (some of which go on to release a mature egg at ovulation). As a fetus you may have up to six million follicles. By the time you reach puberty, however, this has dwindled down to about 360,000 and this number comes close to zero by the age of about 52 for most women (at menopause).

While the quantity of eggs decrease rapidly, so too does the quality of these eggs. The older you are, the more likely eggs will have mutations that can cause disabilities like Down's syndrome. Over time, these eggs are also more likely to be unable to implant in the uterus efficiently and cause miscarriage.

More about fertility and age.

Lifestyle factors such as smoking and extremes of body fat percentage create huge risk factors for female infertility. Toxins like cigarette smoke speed up the destruction of eggs and cause the quality of eggs to deteriorate much faster than normal. Other toxic substances include increased radiation such as from chemotherapy.

Ovulatory dysfunction can be treated with a medicine called Clomiphene, also known as Clomid. Clomiphene, is a drug that is used to stimulate ovulation.

If your brain did not block estrogen receptors, you would probably ovulate all the time and run out of eggs before you were even ready to conceive. When the hypothalamus (the part of the brain that regulates this) is stimulated, the body releases FSH (Follicle Stimulating Hormone) and LH (Luteinizing Hormone). These hormones then stimulate the ovaries, which prompts the beginning of ovulation. This improves the chances that ovulation will occur and can then be timed with sex to increase chances of conception. If this does not work, hormones can also be injected to further increase the chance of ovulation occurring.

Polycystic ovary syndrome (PCOS) is a condition where your ovaries are larger than usual, and have many cysts that don't form mature eggs. This causes eggs that are incapable of being fertilized. Many other symptoms come with PCOS, including irregular or non-existent menstrual cycles, excessive acne and facial hair growth, obesity and mood changes. If you have concerns that you are unable to fall pregnant and have any of these symptoms, see Polycystic ovary syndrome (PCOS) & fertility.

FSH (Follicle Stimulating Hormone) helps control your menstrual cycle and production of mature eggs in your ovaries, so it is an essential hormone for female fertility.

There are over-the-counter tests that can measure your FSH levels, so if you're curious, there is no need to wait. These tests are designed for women of childbearing age to measure hormone levels and test their ability to conceive. If you take a test and have an abnormal result, test again in the next cycle. It may be something as simple as stress or the medications you were taking. If your results are abnormal again, speak to your doctor.

A follicle stimulating hormone test measures the amount of FSH in a blood sample.

Many things happen to a woman's body during menopause, and it is not limited to just ovary function. So early menopausal symptoms are different than that of premature ovarian failure. With premature ovarian failure, you may still have periods, and you may still become pregnant, but your cycles will likely become very erratic. When you go through menopause, on the other hand, you will stop getting your period and you will no longer be able to get pregnant.

This condition is caused by follicle depletion or disruption, which can happen for various reasons. In some women, the cause for premature ovarian failure is unknown. Other women develop this condition as a result of chemotherapy or exposure to other toxins, chromosomal defects caused by genetic disorders, or an autoimmune disease. Your risks increase sharply between the ages of 35 and 40, and if you have a family history of premature ovarian failure, you are at greater risk.

Fallopian tubes are the usual sites of fertilization and the connection between ovaries and the uterus. If there is any obstruction or damage to these tubes, eggs cannot meet with the sperm and are unable to be fertilized. Learn about the amazing journey of sperm.

When the body tries to overcome an infection, it creates a scar that can then close up the fallopian tubes and block the pathway of the egg. The two most common infections are sexually transmitted infections (STIs). Other infections that occur within the abdomen such as appendicitis or diverticulitis can also cause fallopian tube obstruction.

Fallopian tube obstructions are usually treated with in vitro fertilization (IVF). This process begins with hormone injections to cause ovulation. The eggs released from this are removed by the doctor and put into a test tube. The eggs are then added to sperm so that fertilization can occur. After 2-5 days, the fertilized eggs are inserted into the uterus, where they hopefully attach. 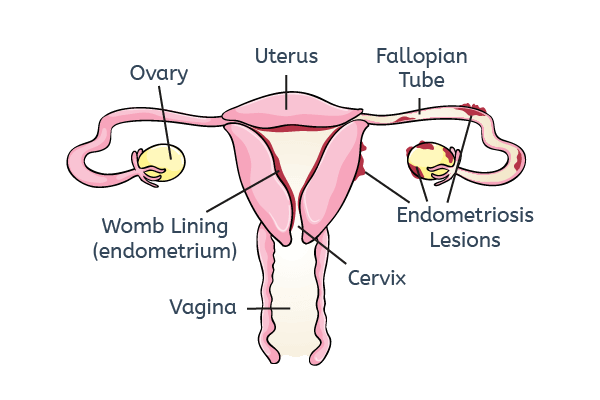 Endometriosis affects 6-10% of women in their childbearing years.

The symptoms of endometriosis can vary based on where the excess tissue resides. Common symptoms include extreme pain before and during periods, pain during sex, infertility, fatigue and bladder problems. If you suspect you may have endometriosis, see Endometriosis symptoms, causes and treatments.

The uterus is the site of growth of the fetus. The fertilized egg implants into the lining of the uterus, so any disruption to this lining or the uterine structure can cause infertility.

Fibroids are non-cancerous tumors that grow in the uterus and can impede the implantation of the fertilized egg. Fibroids can also cause polyp growth, which impedes implantation in the same way. They grow out of the normal, healthy cells of your uterus. They can be as small as a pea or as large as a football, but no matter how large they get, they are almost always benign. 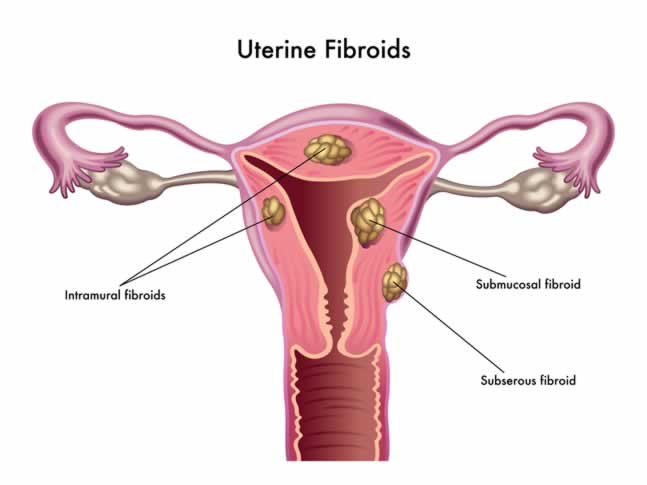 How fibroids can affect fertility

Submucosal fibroids can distort the uterus, which can make it difficult for the embryo to implant into the uterus. This is the most common fertility problem caused by fibroids. Fibroids can also affect ovulation and fertilization. Fibroids may cause changes in the position of the cervix which can affect the number of sperm that can travel through. They may also cause blockages in the fallopian tubes, hinder blood flow to the uterus effecting embryo implantation, or cause changes in the uterine muscle preventing movement of the sperm or the embryo. Learn more about fibroids and treatments.

The cervix is the opening to the uterus that sperm must flow through in order to gain access to the uterus. Any change to the size or function of the cervix affects the ability of sperm to travel efficiently into the uterus for fertilization.

Cervical mucus has a key role in conception in helping sperm enter the uterus, and it also initiates the activation of the sperm. The mucus gives the sperm nutrition and protects it from being destroyed by the natural substances of the uterus and vagina. The glands that secrete this mucus can be destroyed by invasive surgery or infection such as STIs as described above.

If the opening to the cervix is too narrow it can stop sperm from being able to enter the uterus. This can be due to genetic abnormalities or trauma.

Cervical narrowing or mucus derangement can be treated through intrauterine insemination (IUI). This involves a doctor using a tube to insert sperm directly into the uterus, bypassing the cervical abnormalities.

PID is an infection that affects the female reproductive organs. It is one of the most serious complications that can come as a result of contracting a sexually transmitted disease in women because it can cause irreversible damage to the uterus, fallopian tubes, ovaries or other parts of the female reproductive system. PID is the most common preventable cause of infertility in women. Unfortunately, although this infection is preventable, more than 1 million women experience an episode of PID in the United States each year. As a result, about 100,000 women become infertile annually. Also, many of the ectopic pregnancies that occur, especially in teenagers, are as a result of PID. 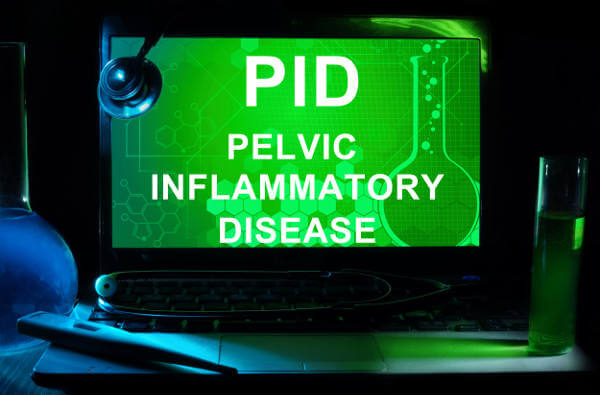 Untreated gonorrhea and chlamydia are the most common causes of PID, causing about 90% of all cases. When the cervix is exposed to these sexually transmitted infections, it becomes difficult for it to protect the spread of bacteria to internal organs. Normally, the cervix keeps bacteria from going any further, but these STIs weaken its defense and can allow harmful bacteria to infect the uterus, fallopian tubes, ovaries and other parts of the reproductive system. PID can also be caused by childbirth, abortion and other pelvic procedures.

Symptoms of PID may vary, so if you have any of the following, be sure to get checked by your doctor right away.

If you have PID, it is important to seek treatment right away, especially if you want to conceive. If you are having symptoms of PID, your doctor will probably first test for chlamydia and gonorrhea. If you have either of these infections, they will need to be treated. He or she may then order an ultrasound to evaluate your reproductive system. The treatment for PID usually begins with a course of antibiotics to stop the infection. Your partner will also need to be treated with antibiotics to prevent reinfection. Pelvic Inflammatory Disease can cause abscesses, or pockets of infected puss, to form. If this occurs, you may need surgery to remove the infected tissue.

Female infertility affects a lot of couples, and there are many causes of it. However, a lot of these causes are manageable.

If you've been trying to conceive for less than six months and wondering why you haven't got pregnant yet, before jumping to any conclusions make sure you know when you're most fertile and when and how often to have sex - this is where Ovulation Calculator can help.